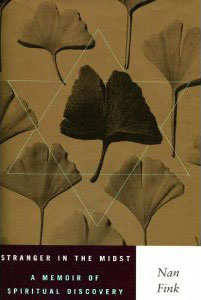 “This intimate account of spiritual transformation is told with both honesty and integrity. Readers will likely think about their own religious leanings after journeying with Fink on her personal odyssey.” (Booklist)

“This is an instructive look at the conflicts, internal and external, of a convert’s life. But most impressive is Fink’s commitment to finding the true meaning of Jewish prayer and practice.” (Kirkus)

“This is an important memoir of a woman who followed the call to conversion.” (Library Journal)

You can buy this book at www.amazon.com.

I remember my first Jerusalem window, rolled halfway down in the back of the sherut, the shared taxi that carried me along the streets of the city. It was Friday evening, ten years ago. I had just arrived from the United States.

Squeezed among the other passengers, I strained to get a glimpse of Jerusalem out the window. Everywhere I saw stone. Stone buildings, stone walls, stone pathways, all glowing with a soft yellow light. The desert air coming through the window was warm and fragrant. The streets were empty. A great hush had fallen on the city in these last remaining moments of sunlight.

“It’s not Shabbat yet, is it?” I asked the English speaking woman next to me.

“You’ll make it to the hotel before the siren,” she answered.

“Good,” I nodded, pleased. I knew about the Jerusalem siren from Michael, my lover. He had told me that it is sounded each Friday at sundown to mark the beginning of the Sabbath, and that I would arrive in time for it, assuming my plane wasn’t late.

The driver dropped me off in front of my hotel just as the sun dipped over the edge of the city. As I entered the lobby, I heard a deep, unmistakable sound. I stopped to listen, feeling the siren’s tone reverberate through my travel-weary body. Shabbat had arrived in all its glory, and I felt as if I had reached the center of the universe.

The Shabbat siren was only the first discovery of that visit to Jerusalem. The whole summer would be marked by such sweetness. Subsequent trips to Israel were more difficult, even horrific, but in those few months, before I became a Jew, I was like a child, open and receptive to everything. Truth seemed to abide in the stone streets, the mountain air, the hot sun.

I was in a state of suspension in those days, learning about the tradition without making judgments. Later I would question everything I had absorbed, but that summer I cared more about becoming familiar with the details of Jewish life than rejecting them.

My imagination was inflamed. When I heard a lecture one evening about not wearing leather on the day of Tisha b’Av because it is a time of mourning, I dreamed about the people through history who walked these Jerusalem streets in porous shoes, feeling the stones sharp underfoot, weeping from the loss of Jewish life I was just beginning to understand.

That summer I was relieved to be away from California. When I went to the Western Wall, as I often did, I sank into despair about the life I had left behind. It was more tangled than I ever intended, and I could not figure out how to set it straight.

A year before, in 1984, I had moved from the Midwest back to California, the state of my birth. Since then, the familiar markers of self had slipped away: I had gone through a painful separation from my husband of eleven years, my youngest child left for college, and my career as a psychotherapist and teacher was on hold until I decided what to do next. The enormous responsibilities of family and profession that I had carried over the previous two decades no longer existed.

A great space had opened up, and it was being filled with something that had been left undone too long: I was studying to become a Jew.

Although I knew about Jewish culture from my close relationship to secular Jews, I had a lot to learn about the religion itself. I had been spiritually drawn to it for years. Even before I left the Midwest, I thought I would convert, but I hadn’t had the time to study it in depth. Now I learned Hebrew at night school, and read books about Jewish prayer, and immersed myself in Jewish history and philosophy.

I was intoxicated by my studies, but other parts of my life were not going well. My effort to convert was creating a distance between my three children and me. Even though they were in college and out on their own, considered adult, this decision greatly affected them.

I was moving away from them, into a place they could not go unless they also converted. They did their best to support me, but I worried that they were being hurt. They were familiar with Judaism, as they had gone to a Jewish nursery school when they were young, and we had celebrated Jewish holidays with friends. But I had existed with them on the Gentile side of the ethnic line, and now I was crossing over, leaving them behind.

Other members of my family were not pleased by what I was doing. My mother, who lives not far from me, had hoped that once I moved back to California I would come to her church. But instead, I attended Jewish services and was careful about what I ate, turning down her offers of nonkosher meat and seafood, filling my plate with vegetables and fruit. What had happened to me?