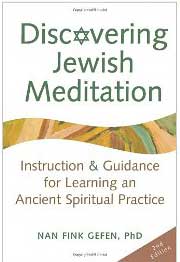 “Encourages Jews of all persuasions to give meditation a shot….Worthwhile.” (Publishers Weekly)

“Shows users how to combine [meditation] with prayer…. An excellent source for classes as well as for independent study.” (Jewish Book World)

Buy this book at www.amazon.com.

Over the years you’ve undoubtedly had experiences that were spiritual in nature. Perhaps they took place while you were reading a poem, or holding a sleeping child. Or walking in the woods, or watching the sunset. Or while you were praying.

These experiences-and more-have helped you know that something exists beyond your regular, everyday reality. This “something” is what I call “the silence within.” To many of us this state seems both familiar and mysterious. It has the quality of spaciousness, and it appears to have no boundaries.

Like a pregnant pause, the silence within contains all possibility. It is the raw material of creation, the formlessness that exists before the concrete emerges. When we enter into this state, we have our most intense spiritual experiences and receive our most significant moments of understanding.

If you are like many people, you probably don’t pay much attention to the silence within as you rush from place to place, juggling responsibilities and meeting deadlines. But you sense its existence. In the quiet moments it hovers just outside your consciousness, and you are drawn to it. It might even frighten you, the scary unknown.

The world’s major religious traditions acknowledge the existence of the silence within. Whatever name they give it, or however they describe it, they see it as something that can be explored. Each tradition has created ways for doing this, and passes them on to succeeding generations.

Likewise, nontraditional spiritual teachers, such as those in the New Age movement, assume that transcendence of everyday life can take place. The experience of the spiritual realm, they say, does not depend on a traditional belief in God or adherence to a particular religion.

In these times of spiritual seeking, many people are turning to Jewish meditation as a pathway to the silence within. They are discovering that the practice is wise and beautiful and that over the years it can lead to great spiritual transformation.

In the pages ahead, you will be introduced to Jewish meditation. You will learn about its background, as well as its techniques. This will enable you to use it creatively in your life. When you understand it in its fullness, you will see its enormous strength. And when you learn how to practice it, you will receive the great gift of its living presence in the years ahead.

WHAT IS JEWISH MEDITATION?

Most simply, Jewish meditation is a spiritual practice found within the Jewish tradition.

The best way to describe it is to consider its name. The word “Jewish” is included because meditation has been-and is-a part of Judaism. Traditionally it exists alongside other aspects of Jewish observance, such as prayer and Torah study. Less traditionally, it is done alone as a spiritual practice.

Jewish meditation uses images, words, and symbols that come from the Jewish tradition. The meditations themselves, and the teachings that go along with them, reflect Jewish understanding. Because of this, people who are introduced to Jewish meditation will not mistake it for any other meditative practice.

Now we move on to the “meditation” word in Jewish meditation. Meditation is a specific kind of activity that involves directing the mind. It follows a prescribed order, and it uses techniques different from ordinary thinking or daydreaming. The activity takes place during a prescribed time period, and thereby has a beginning and an end. Although the contents of Jewish meditation are unique in many ways, it joins other meditative traditions in directing the mind to the silence within.

Jewish meditation can be further described as an organic practice that has grown and changed through history. Although it is part of Judaism, it nevertheless has absorbed elements from other traditions, such as Sufism, Gnosticism, and Buddhism. The practice contains a great variety of teachings and meditations. At different times creative bursts of collective insight into the use of meditation have taken place. One, in fact, is going on right now.