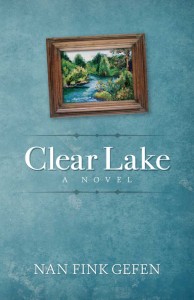 “Clear Lake is the story of a woman in midlife as she wrestles with long-term grief, guilt, betrayal, and confusion on the way to finding peace within herself. Highly readable and inspiring.” (Cornelia Nixon, author of Angels Go Naked and Jarrettsville)

“Nan Gefen has a deft hand at creating emotionally resonant characters who linger in the mind, as dear friends do, long after the mystery tucked into this novel is solved.” (Joan Steinau Lester, author of Mama’s Child)

“Written with insight and compassion, Clear Lake introduces us to a likable heroine struggling with conflicting obligations and guilt. We follow her story willingly because we, too, have had the experience of failing those we love and making the wrong choices. The prose is lucid and clear, like the lake of the title.” (Brenda Webster, president of PEN West American Center)

Clear Lake is available in print and e-book at www.amazon.com or www.barnesandnoble.com.

Back at the cabin, Rebecca slowly put away her supplies, exhausted by her efforts. She dragged the cushions from the couch out to the deck and made a comfortable nest for herself where she could sit undisturbed. The lake beneath her cast off a faint stagnant odor, but it bothered her less than she would have thought possible. She sighed deeply, her whole body letting down. This was exactly where she’d wanted to be, although she hadn’t known it before she arrived.

All semblance of internal order fell away. Rebecca stayed on the deck, staring into the distance without really seeing anything. Mountains and lake and trees merged into a blurry mass, and fragments of thought ran through her mind but none stayed. It was as though her life’s course had brought her to this moment, and there was nothing to do but dwell in it.

And then she began to weep, long sobs that seemed to come from the core of her being.

After a while a feeling of fear began to race through her, and she imagined she would lose her balance, her sanity, everything she’d worked for. She tried to pull back to safety, but then she looked down at the putrid waters and wept some more. “So much sadness,” she cried. “So much loneliness and emptiness.” She wiped her runny nose on her arm, and the tears flowed even more, sliding down her cheeks and dropping onto the deck.

The afternoon passed in this way. Rebecca did not notice the sun moving from one side of the deck to another, or the family of ducks that paddled by, or the spider crawling next to her nest of pillows. Finally she got up, her legs hardly holding her, and staggering inside, she collapsed on the bed and slept soundly for fourteen hours.